a place for passing fancies 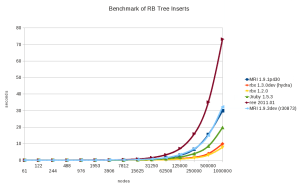 After hearing a bit about the improvements in the Rubinius ruby interpreter, I decided to test a handful of the interpreters against the Red-Black tree insertion script I last posted about.

As a forward, this is completely out of idle curiosity, and with no deep intentions. The results had distinct winners and losers, and for more rich benchmark, this would need to include multiple iterations and some other aspects as well. All that to say, this is not an all encompassing benchmark.

The results are the length (in seconds) of time for the execution.

So using the rbtree.rb, that I last blogged about, using rvm, I have just run it through the following ruby interpreters:

From an early look at it, the Rubinius interpreter is on to something good. For this example at least, their current release branch (1.2) is smoking, compared to anything else.

To look at the values, that make up the graph above, here is the spreadsheet